JOE:  General Larcher is one of the handful of characters created solely for the graphic novel. I also took the most liberties with him. He is a formidable enemy for Stryke and his war band and tries to match their ferocity on the battlefield. Despite his musclebound physique, he is terribly insecure and if there were performance enhancing drugs in his time and place, he would most certainly use them and then deny it up and down. He almost has a sliver of respect andawe for the orcs he's be charged with obliterating. 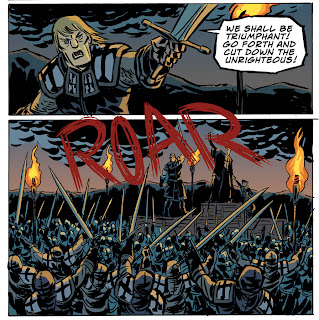 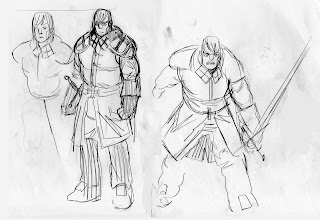 STAN:  All stories, no matter how epic, are best told through focusing on the trials and tribulations, the setbacks and triumphs of individuals embroiled in the greater plot.  (Think Shakespeare, War and Peace, The Lord of the Rings . )  You risk losing reader empathy unless you zero in on your main protagonists and tell your tale through them.  Which means that to some extent your characters stand not only for themselves but also their race, their culture and the sweep of history carrying them on.  So apart from being a character in his own right, General Larcher, like Kimball Hobrow, represents something bigger.  In Larcher's case it's the cause he supports, and to some degree a certain type of military mind - the inflexible sort.  But he isn't without his doubts.  The certainty of his faith and the rigidity of his soldierly thinking are somewhat at odds with the grudging respect he feels for his opponents, the orcs.  He's a bit conflicted. 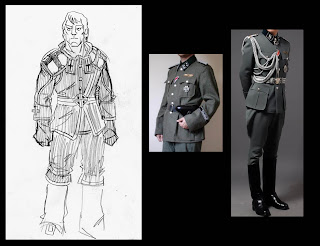 JOE:  While developing Larcher, I continued to play around with the Uni uniform. I looked at Nazi officer's uniforms to add little touches to the Uni's garb. The Uni collar and belts and boots are all inspired by some of histories greatest monsters.