JOE: Early on I was debating whether or not the Wolverines, the war band of orcs that Stan's series centers around would wear helmets. I did quite a few drawings of orcs with different types of protective headgear, but nothing really stood out for me, plus I wanted the reader to be able to tell one orc from another. So here are some orc helmet designs that were never used.

STAN: It’s strangely comforting to know that artists come up with concepts that ultimately don’t get used. Writers commonly do this as well. I’ve often cut sentences, paragraphs and chapters; even characters and whole sub-plots. Much as you might like an idea, or think you’ve produced a pretty decent piece of writing, if it doesn’t further the plot it has to go. Sometimes you just have to kill your darlings, as Stephen King memorably put it. 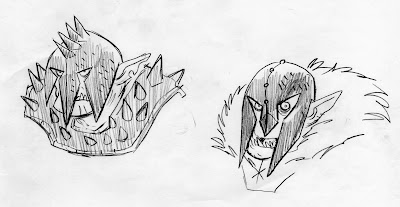 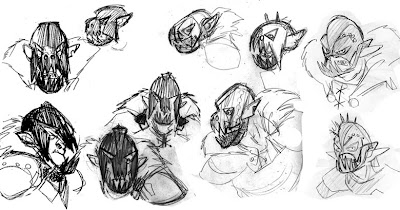 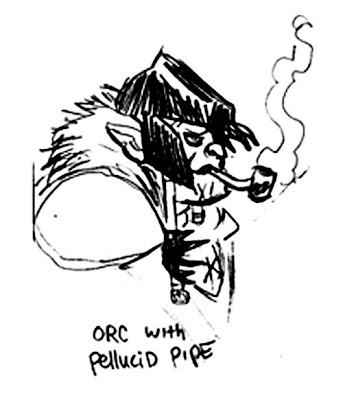 Posted by Unknown at 7:48 AM No comments: 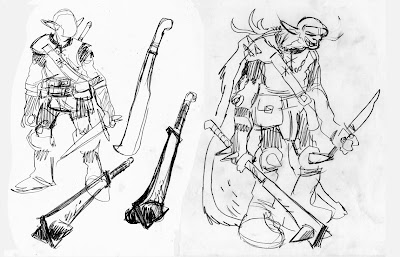 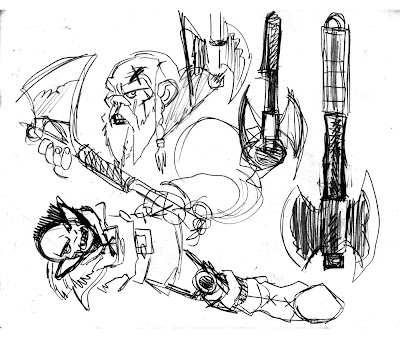 Posted by Unknown at 7:42 AM No comments:

Welcome to the Orcs Sketchbook. A blog dedicated to the writing and drawings that led to the graphic novel, Orcs: Forged for War, written by Stan Nicholls and drawn by Joe Flood. Over the next month or so we'll be posting a treasury of never before seen pictures and words from the Orcs universe. Enjoy. 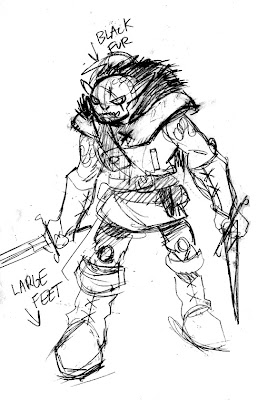 JOE: Here is the earliest orc drawing I could find. I drew this back in the summer of 2008 and I had just picked up Stan's Orcs Omnibus. I was probably only about 40 pages in when I drew this. Note the black fur trim around d the neck and the leather gauntlets on the forearms, two elements that stuck. 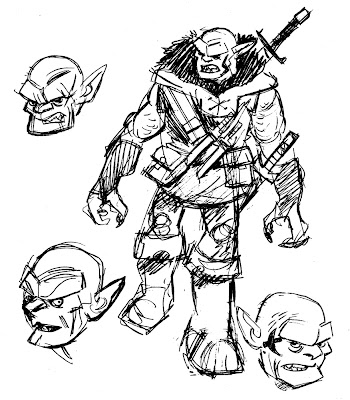 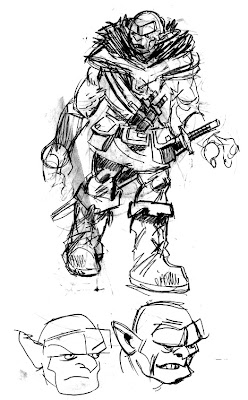 These next two I start to experiment with different facial structures. The hands are oversized giving a ape like appearance. 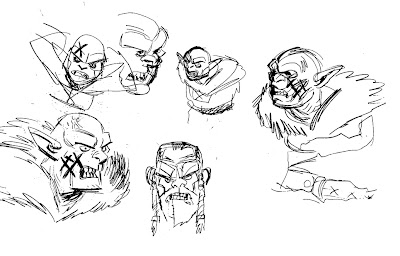 More orcs faces and an early version of Jup, the only Dwarf in the orc war band.

STAN: In my novels I describe the orcs very lightly, which must have given Joe a tough job working out how to portray them. I deliberately keep the descriptions sketchy because I want readers to supply their own vision of these creatures. (Tolkien was a bit vague in describing his orcs, too, though that’s the only similarity between us.) As a general principle I favor leaving certain aspects of plot, location and character to the readers’ imaginations. I think it’s important to supply a space people can dream in. I also like the idea of seeing how artists interpret my characters without too much direction from me, and the covers of the many editions of the books worldwide have provided some very interesting versions. Joe’s is particularly satisfying.