JOE:  I really wanted to emulate samurai films in the Orcs graphic novel, the sketch below is an example of a moment of a near impossible feat of swordsmanship. As the project came along, the word "impossible" started to bug me. 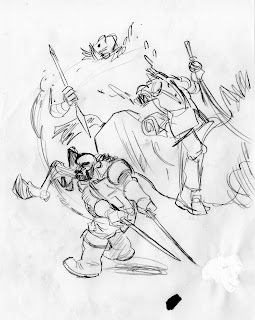 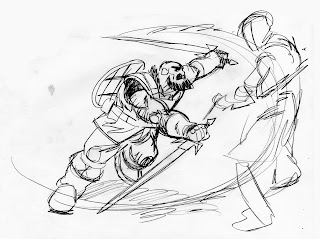 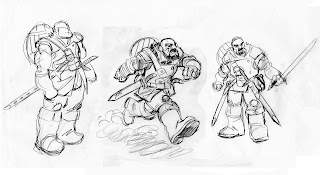 JOE:  For Jup to have the reach with a blade that would facilitate a lot of the moves I wanted him to pull off, they would have to be long swords, not the short ones from earlier sketches. But with longer swords, something as simple as a light jog would be difficult.

STAN:  Here we have Joe confronting the same sort of problem writers have to resolve.  It's the old function versus decorative conundrum: what looks cool isn't necessarily practical.  In one of my other fantasy series, the Quicksilver trilogy (known as the Dreamtime trilogy in the US), my central character carried his sword strapped to his back - something else that was probably influenced by samurai movies.  But while it's a convenient way to transport a weapon, it's hopeless if you need to draw it in a hurry.  In the end you tend to go for some kind of compromise between elegance of appearance and reality.

JOE: I did a series of sketches, of Jup just drawing his swords, to see if this was something he could do easily and quickly. It was at this point I began contemplating giving him an axe instead. 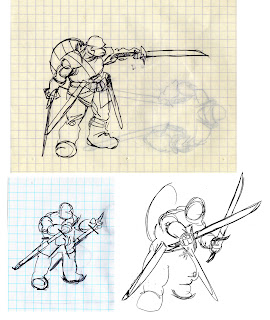 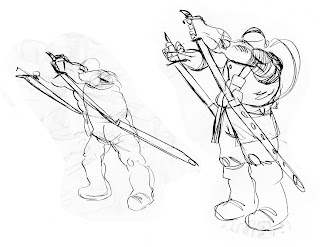 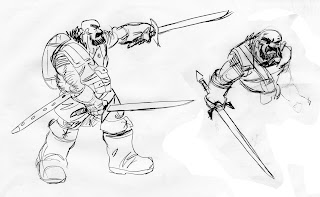 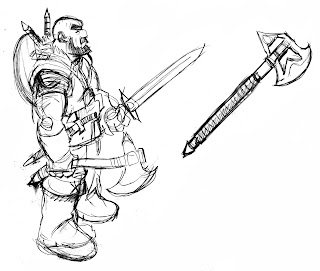 JOE: I was 100 pages into penciling when I came to this particular page. I was torn, the swords look cool, but how on earth would Jup be able to draw them both while on a horse. 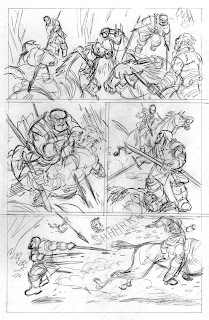 JOE:  I came up with a harness for his alternate weapon, a pair of axes. The axe heads hang on his belt, he simply need to unhook the harness and slid the axe handles forward. In the end the axes won out, and now I know why it is the weapon of choice for dwarves everywhere. 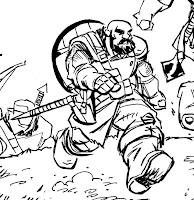 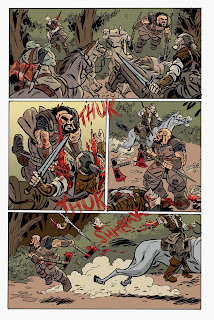