JOE: I'm changing things up a bit, I've got a lot more drawings of Stan's misunderstood protagonists, but for the next few posts I'm going to focus on some of the antagonists. 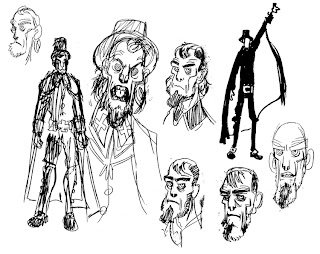 JOE: Kimball Hobrow is described as tall and gaunt, clad in all black with a stovepipe hat. My first thought was, "evil Abe Lincoln?" My thoughts soon turned to the overzealous Puritans from books I read in High School, The Crucible and The Scarlet Letter. I can't help but to compare one piece of literature to another, and then it hit me. "I'm going to model my Kimball Hobrow after Gregory Peck as Captain Ahab in the film adaptation Moby Dick."  This is how I operate. I look at one person's visual adaptation of a piece of literature and use it in my visual adaptation of a completely different piece of literature. Stealing someone's idea and using it in another context is what makes working in the visual arts so much fun. 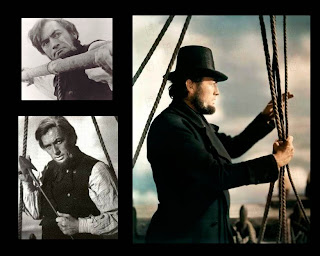 STAN:  I knew Joe's depiction of Kimball Hobrow reminded me of someone!  (And on the trivia front, John Huston's 1956 version of Melville's classic had Ray Bradbury as its principal scriptwriter, of course.)  I don't think I had any particular model in mind when I came up with Hobrow, though what goes on in our subconscious should never be discounted.  Somehow, and certainly not consciously, an element of the wild west seemed to creep into certain facets of the orcs series, and no more so than in the character of Hobrow.  It was only after I created him that I saw a kind of Judge Bean aspect in there.  Some people assume that I'm being critical of all religion in the orcs books, or indeed faith itself.  What I in fact had in mind were the extremists; the fanatics who try to impose their unbending beliefs on others.  Kimball Hobrow was my attempt at personifying that. 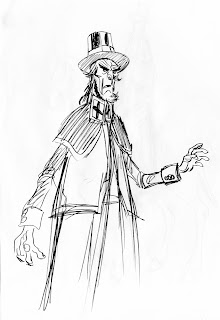 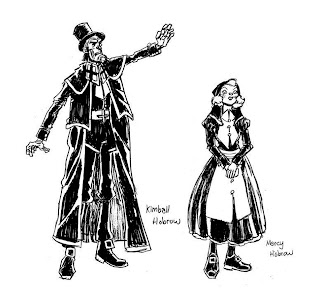