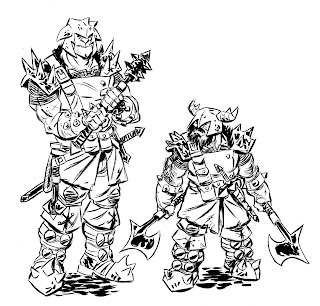 STAN:  Conflict breeds drama.  For a warband like the Wolverines, conflict's a daily occurrence, so there's plenty of drama in that respect.  But inevitably there are tensions within the band too, and no more so than in the relationship between Haskeer and Jup.  Haskeer's usually the antagonist, his animosity partly based on the fact that the dwarves tend to be more pragmatic than idealistic, and many fight for whichever side pays the most.  This isn't the case with Jup, but Haskeer occasionally has doubts about that.  They also have different temperaments - Haskeer can be reckless where Jup exercises caution, for example - but at base they share certain things in common, like a love of combat and loyalty to the band.  There are times when either would happily slit the other's throat, but when the chips are down their instinct is to co-operate. They've saved each other's lives on more than one occasion.  It's a classic love-hate thing. 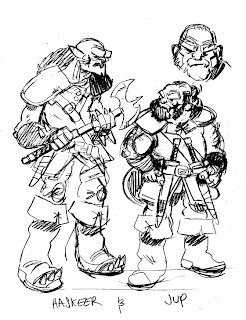 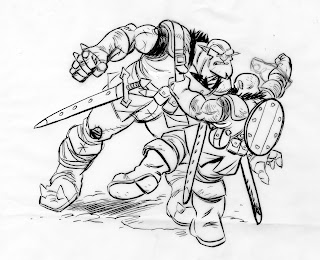 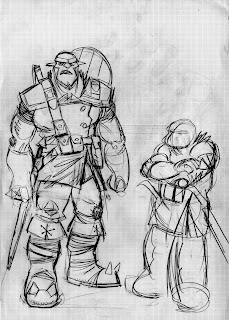 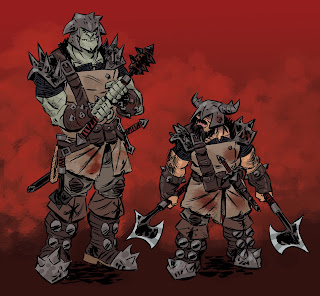 JOE: "One's an orc, with a violent steak and a head full of concrete, the other's a dwarf with precognitive powers and chip on his shoulder. But when these two have to team up and fight there way through a fantasy world full of monsters, fanatical holy warriors and evil sorceresses, things are gonna get a little nuts!"  That would be the the trailer if they ever made a movie about Haskeer and Jup.
Posted by Joe Flood at 10:55 AM